Advice on Scuba Diving in Gulf of Mexico, Mexico

Part 1: Overview of Scuba Diving in Gulf of Mexico, (Mexico)

Veracruz is a large port city on the Gulf of Mexico about 400 kilometers (250 miles) due east of Mexico City. The port of Veracruz itself is polluted and crowded, not suited for scuba diving. However, if you boat just 20 minutes out into the port, the Gulf of Mexico's clear blue-green waters shine through and offer some of the best scuba diving in Mexico. There are submerged reefs out beyond the port and a bit to the south, and an island called Isla de Sacrificios. The island has a famous landmark lighthouse and many tourists visit the island each year.

The emergent reef platforms in the port of Veracruz are collectively known as the Systema Arrecifal Veracruzano or Veracruz Reef System (VRS); there are eight major platforms. A platform reef is a reef bank that extends from the ocean floor and is generally found off the coast, which may contain sandy cays and a lagoon. In the case of the Veracruz platforms, there are no true lagoons and few cays. There are great scuba diving sites along Veracruz's platform reefs, and they are not crowded and overused.

Further south of Veracruz is the small town of Antón Lizardo, where there are many great scuba dive sites and scuba shops to checkout. The most dominant coral on these reef platforms are Great star coral, Boulder brain coral and Massive starlet coral; together these three make up about 70% of the coral you will see when scuba diving off Veracruz. A common site when diving these reefs are the huge groupers that do so well and are a pleasure to dive with. Other colorful inhabitants of the reef are the Queen angelfish and Honeycomb cowfish.

To the north and south of Veracruz, you will find beaches with warm gulf breezes and palm trees everywhere. There are many great places to stay and eat and enjoy the beaches that the Gulf has to offer. And scuba diving is available at many locations along the coast. Many places along Mexico's Gulf coast are still unexplored or at least not official known scuba diving sites.

Established scuba diving sites around the Mexican state of Veracruz are not well known. The waters are clear, the marine life and reef is flourishing, and the palm trees blow in the wind, giving that classic Veracruz sound. The visibility and color of the water is exceptional and warm. As you travel south along the Gulf coast, the waters get clearer and bluer as you get away from the sandier, cloudier waters of the northern shores of the Gulf of Mexico, along the Texas shore for example. The reef system offshore from the Veracruz coast is great for scuba diving and still a hidden treasure in Mexico. The reef off Veracruz is a designated Marine National Park.

Many ships have sunk in the last five centuries near the port of Veracruz. There are five notable wreck dives that not only offer great wreck diving, but most are on beautiful reefs that are thriving with marine life despite the pollution and high traffic port.

On Blanquilla Reef just north and out from the Port of Veracruz is the site of the USS Tacoma wreck. Found in just 10 meters of water, the US patrol ship sank in a heavy storm off the reef of Veracruz while on patrol in January 1924. The wreck called Riva Palacio lies in 28 meters of water, off the Anegada Reef and Isla Verde out in the port of Veracruz. The minesweeper was originally part of the US Navy and was called the USS Jubilant. The ship was sold to the Mexican Navy in 1962 and eventually named the Riva Palacio before finally being sunk off shore from Veracruz as an artificial reef in 2000. Another shipwreck known as El Hidalgo lies out past the port near Isla Verde. This wreck dive site is only a 30-minute boat ride, and is a great dive for beginners. These three wrecks are all within about a 30 minutes boat trip from Veracruz. Out past the hustle and pollution of the port, you will be surprised how clear it is. Divers report seeing trumpet fish, huge Nassau grouper and abundant schools of red snapper and many other marine life that thrive in the sanctuary of the wrecks and the surrounding coral reef.

A bit further south and out from the port of Veracruz are two other dive-able shipwrecks worth hiring a boat to check out. The Maria Elena wreck is found on the northern end of the large Anegada reef. The wreck El Rielero is on the other end of the Anegada reef to the south. Both wreck dives are suitable for intermediate level divers, and when the currents are low, which they often are, beginners can enjoy these wrecks with relative ease.

North of Veracruz are known dive sites that are worth planning a trip to explore. Arrecife Los Amarillos (the Spanish word “arrecife” translates as “reef”) is a great reef to explore. Located offshore and just north of the isolated Chachalacas Dune field, the Los Amarillos dive site is only about 20 minutes up from Veracruz along the shore. There you will swim with tarpons, eagle rays, octopus and see lots of coral and anemone. There is a 120-foot drop off at the Los Amarillos dive site, ideal for observing large fish such as grouper, shark, and schools of snapper.

South of the city of Veracruz and within the southern realms of the state of Veracruz is the city of Coatzacoalcos, an industrious port city not far from the border of the Mexican state of Tabasco, which marks the beginning of the Yucatan peninsula region. Offshore from Coatzacoalcos and to the south, there is the dive site Punta Gorda. With a maximum depth of about 40 meters, Punta Gorda is a paradise for soft and hard corals and the many smaller fish that inhabit the reef. The visibility at Punta Gorda is notoriously exceptional, making it a great dive site for intermediate level scuba divers looking to explore off-the-beaten-path scuba dive sites along Mexico's Gulf coast.

If you are in Mexico City and would like to scuba dive and explore the Gulf of Mexico's coast, a great place to start is the city of Veracruz. From Mexico City the drive to Veracruz takes about 3 hours, but a hop flight from Mexico City will get you there very quickly. Fly out of Mexico City's Internacional Benito Juarez Airport (MEX) or take a flight from most of Mexico's other major cities. Arrive in Veracruz's Las Bajadas Airport (VER) and rent a car, from there explore either north or south. Veracruz is a great central location to explore along Mexico's Gulf coast.

Consider driving to Veracruz if you are in the United States. From the very southern town of Brownsville, Texas the drive to Veracruz takes about 12 hours. Once you get south of the city of Tuxpan, Mexico the drive is very scenic and passes by many beautiful beaches.

In Veracruz you will have the pick of the crop as far as dive shops, and will get amazing attention from the friendly, skilled instructors in the area. Veracruz, as a scuba diving destination, is still in its infancy compared to the Caribbean Yucatan area. Check out the scuba diving shop known as Scubaver. They offer dive trips out to the reef in the marine park not far from the city of Veracruz. They make regular trips to the south to Anton Lizardo and the many dive sites along the surrounding reefs. In Veracruz, there are also the dive shops Dorado Buceo and Mundo Submarino. Both are worth checking out and arranging a day boat trip with to bring you out to the reef platforms around Veracruz.

South of the port of Veracruz in the small coastal fishing town of Anton Lizardo you will find Sobuca Dive Shop, which is a great scuba diving resource in this small community. Anton Lizardo has extensive fine, dark, hard-packed sandy beaches convenient for small boats to depart from, making Anton Lizardo a popular place to embark on scuba diving day trips. There are also small boats for hire along Anton Lizardo's beaches that can arrange private scuba diving trips for the experienced scuba divers who know how to use their own equipment. 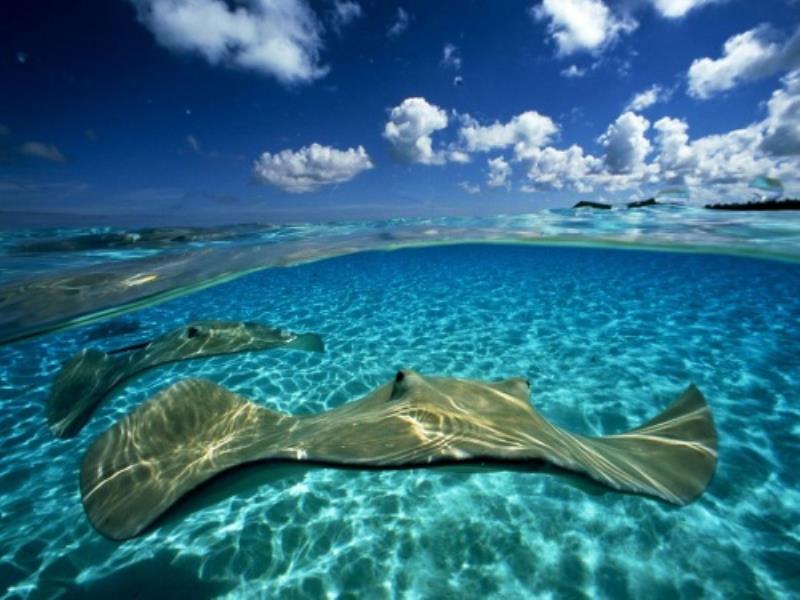 Established scuba diving sites around the Mexican state of Veracruz are not well known. The waters are clear, the marine life and reef is flourishing, and the palm trees blow in the wind, giving that ...

If you are in Mexico City and would like to scuba dive and explore the Gulf of Mexico's coast, a great place to start is the city of Veracruz. From Mexico City the drive to Veracruz takes about 3 hour...

Each year, between January and March, sardines congregate off Isla Mujeres, Mexico, attracting the fastest fish ever recorded. Sailfish feed on these bait balls, and divers seek out snorkeling experiences to watch these sleek and elegant fish dart through the water, feasting on sardines.

Every year, between June and September, hundreds of whale sharks can be found in the deep waters northeast of Isla Mujeres, Mexico.